(Excerpt from "Monsters & Kittens: The World Of Jacob Mantia")

(Jacob's original website, jacobmantia.com, has since been repurchased [as of 8/22/2015] by a Japanese painting company; hence, here we are, on jacob-mantia.com. It's all good.) 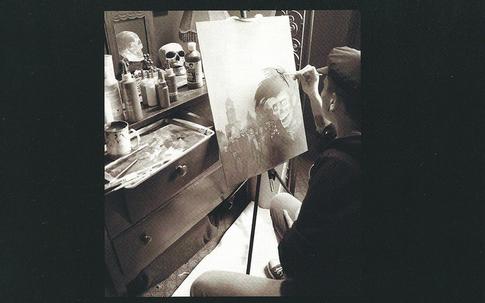 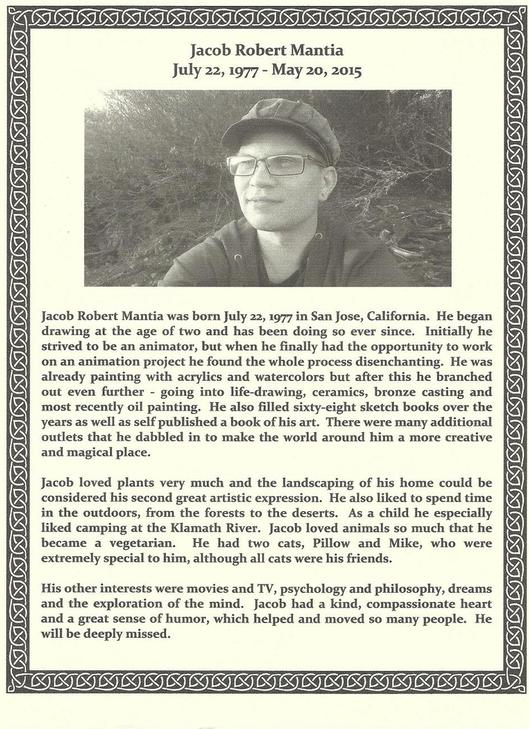 ​“Jacob Robert Mantia was born July 22nd, 1977 in San Jose, California. He began drawing at the age of two and has been doing so ever since. Initially he strived to be an animator, but when he finally had the opportunity to work on an animation project he found the whole process disenchanting. He was already painting with acrylics and watercolors but after this he branched out even further – going into life-drawing, ceramics, bronze casting and most recently oil panting. He also filled sixty-eight sketch books over the years as well as self published a book of his art. There were many additional outlets that he dabbled in to make the world around him a more creative place.

Jacob loved plants very much and the landscaping of his home could be considered his second great artistic expression. He also liked to spend time in the outdoors, from the forests to the deserts. As a child he especially liked camping at the Klamath River. Jacob loved animals so much that he became a vegetarian. He had two cats, Pillow and Mike, who were extremely special to him, although all cats were his friends.

​His other interests were movies and TV, psychology and philosophy, dreams and the exploration of the mind. Jacob had a kind, compassionate heart and a great sense of humor, which helped and moved so many people. He will be deeply missed.”

No piece is too small. Please send any images or memories to contact@jacob-mantia.com and your message will be returned immediately.

All images and stories will be credited and featured, with permission from sender.

With your help, $1,230.00 was raised for the 2016 Out of the Darkness South Bay Walk in honor of Jacob to support the American Foundation for Suicide Prevention's mission to save lives and bring hope to those affected by suicide.

​WE ARE ALWAYS SEEKING CONTRIBUTIONS TO JACOB'S MEMORY.


I was born and still live in California's Silicon Valley. While growing up I always had a fascination with rubber monsters, the occult, the female form and animation. I have been drawing since the age of two and it hasn’t stopped since then. It was my goal to be an animator at a pretty young age. As I got older it became an obsession. When I finally got to work on an animated project for a company, I found the whole process very disenchanting. It was also at this time when painting took more of a center stage in my life as the utmost way I wanted to express myself. I still feel that my animation background shows up in my art. In my art I feel that my love for the female form and cheesy low budget monster movies always tend to manifest itself in most of my pieces. I typically work in Cel vinyl paints on cold press illustration board or on primed masonite. I am currently working on two books, one is a collection of sketches. The other is a childrens book collaboration about monsters.
To see more of Jacob’s work head on over to his homepage: Jacobmantia.com

Jacob Mantia is not part of the human race but a mere observer sent here from the planet Mars. He became disenchanted with the study of the human race right from the start. At times you can see him intermingling with the public in the guise of the 1950's iconic male, but that is very rare. In his solitude he fell in love with art and has dedicated his life to painting subjects he finds fascinating. His subject matter ranges from pin-ups to monsters and at times cute things as well.

Hey, welcome, and thanks for stopping by.