​“Jacob Robert Mantia was born July 22nd, 1977 in San Jose, California. He began drawing at the age of two and has been doing so ever since. Initially he strived to be an animator, but when he finally had the opportunity to work on an animation project he found the whole process disenchanting. He was already painting with acrylics and watercolors but after this he branched out even further – going into life-drawing, ceramics, bronze casting and most recently oil panting. He also filled sixty-eight sketch books over the years as well as self published a book of his art. There were many additional outlets that he dabbled in to make the world around him a more creative place.

Jacob loved plants very much and the landscaping of his home could be considered his second great artistic expression. He also liked to spend time in the outdoors, from the forests to the deserts. As a child he especially liked camping at the Klamath River. Jacob loved animals so much that he became a vegetarian. He had two cats, Pillow and Mike, who were extremely special to him, although all cats were his friends.

​His other interests were movies and TV, psychology and philosophy, dreams and the exploration of the mind. Jacob had a kind, compassionate heart and a great sense of humor, which helped and moved so many people. He will be deeply missed.”

Photographs taken at Jacob's memorial service on Saturday, June 6th 2015 in Morgan Hill CA. All copyright, licenses and respective ownership belongs to the artist Jacob Mantia and his surviving relatives.

No piece is too small. Please send any images or memories to contact@jacob-mantia.com and your message will be returned immediately. All images and stories will be credited and featured, with permission from sender.

We are always seeking contributions to Jacob's memory. 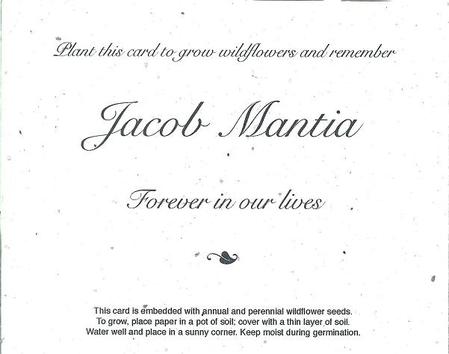 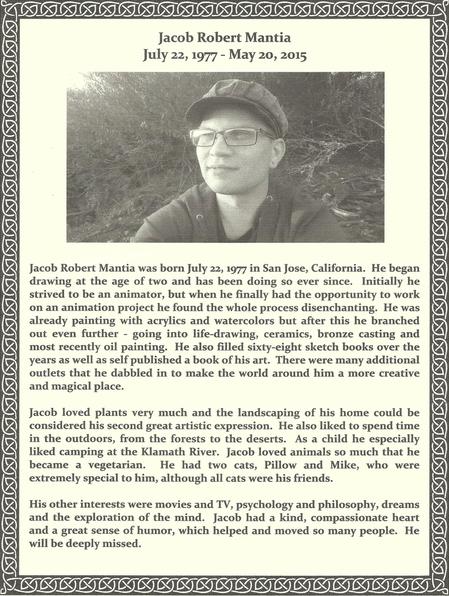